Description
Michael Phillips is one of today's most popular Christian authors. He has written more than four dozen novels, with over five million copies in print. Angels Watching Over Me is the first book in a stirring saga that follows two women, one black, one white, in the aftermath of the Civil War.

Before the war, Rosewood Plantation is large and prosperous. During the war years, women and slaves struggle to keep it running. But in the bloody days following the Northern victory, a marauding band of Union soldiers ravages Rosewood. Katie, the master's young daughter, and Mayme, a slave girl, are the only survivors of the carnage. Now the two have only each other, and their shared faith in God, to rely on.

As their friendship grows, so does their conviction that God is directing them to work together. Michael Phillips' flair for creating engaging characters and narrator Susan Spain's thoughtful reading are a perfect match. 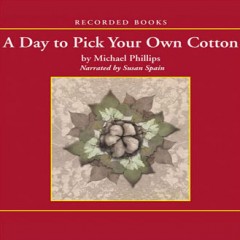 A Day to Pick Your Own Cotton (Shenandoah Sisters Series, Book #2)
Michael Phillips
Regular Price: $19.99 Member Price: $15.99 (or 4 credits)
Sign up for our newsletter!