In ancient Israel, at the crossroads of the great trading routes, a man named Benaiah is searching for a fresh start in life. He has joined a band of soldiers led by a warlord named David, seeking to bury the past that refuses to leave him. Their ragged army is disgruntled and full of reckless men. Some are loyal to David, but others are only with him for the promise of captured wealth. While the ruthless and increasingly mad King Saul marches hopelessly against the powerful Philistines, loyal son Jonathan in tow, the land of the Hebrew tribes has never been more despondent—and more in need of rescue.

Over the course of ten days, from snowy mountain passes to sword-wracked battlefields, Benaiah and his fellow mercenaries must call upon every skill they have to survive and establish the throne for David—if they don’t kill each other first. Day of War brings to life the exploits of the Mighty Men of Israel, a rag-tag band of disgruntled warriors on the run with David, the soon-to-be King. Their legendary deeds are recorded in 2 Samuel 23 and 1 Chronicles 11

WOW - Great book
What a great book. It immerses you in a world of Gods power and the violent times of the Hebrews as they fight and try to claim the promises of God. Make no mistake, this is not a kids' book. It is a book of mighty men (Gibborim) living in violent times, being violent, and fighting evil. The work is very well written and the narration is spot on. Great book.
Review by Dan / (Posted on 6/7/2021)
Excellent & Exciting Way to Meet Biblical Characters
The story is amazing. True to the biblical account that we have with great imagination and creativity that fills in the gaps in this work of historical fiction. The characters really come to life. The narration is well done and easy to listen to.
Review by Boomer / (Posted on 8/23/2016)
Great audiobook.
Great book from a great audiobook company.
Review by Jesse / (Posted on 8/22/2016)
Show ALL Reviews
An Age of Warriors
Cliff Graham's Day of War is unique in that it is a celebration of manliness in the age of the warrior. This is the only Biblically based historical novel that I am aware of that places the accent in this way. It is not only a tribute to YHWH and his faithful, it is also a tribute to manliness. It is exceptionally well written and narrator, Stefan Rudnicki takes the whole thing to a new paradigm. With the voice of a warrior, together, author and narrator, will captivate your imagination as you relive the life of David and his mighty men.
Review by JP / (Posted on 12/10/2013) 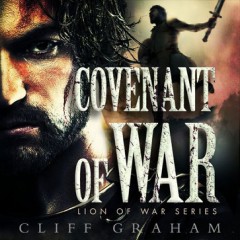