In the latest installment in Wendell Berry's long story about the citizens of Port William, Kentucky, readers learn of the Coulters' children, of the Feltners and Branches, and how survivors "live right on."

"Ignorant boys, killing each other,” is just about all Nathan Coulter would tell his wife about the Battle of Okinawa in the spring of 1945. Life carried on for the community of Port William, Kentucky, as some boys returned from the war while the lives of others were mourned. In her seventies, Nathan’s wife, Hannah, now has time to tell of the years since the war.

Heart-warming.
Sweet, real-life, relatable, true to me. Not everyone will like this, but I sure did!
Review by Darcy / (Posted on 4/1/2019)
Excellent
I loved this book. The author has an amazing ability to articulate life and all its ebb and flow. The narrator, Susan Denaker was fantastic. Probably the best narrator I’ve heard. Well done, all around.
Review by folkydot / (Posted on 9/22/2018)
Wonderful
It is an amazing book that transforms you into the time and place that once was. A time my children will never know and that I had only a glimpse of. It is a book I will read again and again. And one that I will recommend over and over. Thank you for this gift.
Review by Stahlgirlios / (Posted on 1/16/2017)
Show ALL Reviews
Back to a simpler time
It's like a visit to bygone days that were simpler and sweeter!
Review by Libby / (Posted on 8/23/2016)
A measure of empathy
Wendell Berry is an amazing writer. Hannah Colter is one of many novels set in a time period when life was more simple and difficult. The books are written by the different characters and follow their lives through the joys and pains that are our lives. While Hannah Colter comments on recounting 'giving thanks' I was struck by the sorrow and pain she suffered. I don't know if that's a greater reflection on me than it is on the character, but I would highly recommend this book to anyone with a soul!
Review by Nate / (Posted on 7/11/2016)
Had a hard time believing this was Christian fiction
Although the writing was very good, and I thoroughly enjoyed the characters and plotlines, I was constantly looking for anything Christian in it. Church was not an integral part of the characters lives. Once in a while there was a minor reference to a bible verse. The use of language upon occasion was a red flag for me. I think this was fairly moral and mostly sweet, but I would not consider this Christian fiction, and the fact that I bought it from Christianaudio was a bit off-putting. With that thought in my mind I think I enjoyed it just a little less than I would if it had been labelled "moral fiction".
I have to admit, the narrator (Susan Denaker) was excellent!!
Now I'm listening to Nathan Coulter and the language in that is worse by far. I have a feeling I'm going to be wincing all the way through it.
Sorry Mr. Berry, I felt that none of that language was necessary if you want it to be enjoyed by folks who are trying to escape from the world's values.
Review by JOLEEN / (Posted on 8/16/2014)
Disappointed with language
The story was interesting, with wisdom through the years coming out, but I deleted it because I didn't care for the language that it used....Not something I'd allow in my home as a Christian.
Review by notachicken / (Posted on 3/27/2014)
Nearly 5 stars
I would give this five stars except that a few times, Berry goes off on tangents that seem to clearly be him stating his opinions apart from the character. A chapter on the horrors of Okinawa, for instance. But once again, Berry writes an amazing account of one woman's memories of growing up as a "member" of the Port William community. Some of the stories are familiar, if you've read other Berry stories, but this time they're from a woman's point of view. In telling my wife about what I was reading, I would usually refer to what "she" was saying instead of what Berry was writing (regardless of what I wrote above.) Of those stories, I was a bit perplexed by the suicide of one character not being mentioned by Hannah, which we read about in another of Berry's books, even though she was personally close to that character.

Of course, Berry weaves into the story his views on agriculture, community and war and peace. There's even a little sex, from a woman's point of view worked into the narrative.

Bottomline, I can't get enough of Wendell Berry and was disappointed he did not win the Nobel Prize for literature. Hopefully, before he dies.
Review by Dan / (Posted on 10/13/2013)
Progress is not always improvement
How do you discuss a book like this? It is a beautiful story. Berry knows how to draw you into the world of rural 1930-2001 in a way that makes me almost miss not living it. I have not read anything by Wendell Berry before, but he has been recommended to me by many and I will read more.

Hannah Coulter is the narrator of the book. She is telling her life story from her old age and it is remembered clearly. This is a first person narrative and it never breaks from that. It is a perfect book to listen to because the single voice fits perfectly. Susan Denaker does a very good job embodying Hannah.

The story starts with Hannah as a young girl recounting the death of her mother and her early years with her father and step-mother during the depression in rural Kentucky. The story winds through WWII, raising children and living life on a farm in the 50s and 60s. Aging and having your children leave home. Changes in culture and life as the world moves away from its rural roots and the sense of ‘Membership’ in a community fundamentally changes as people lose their roots and children and parents live apart. Hannah Coulter is not a fast novel. It is slow. It takes time to tell a story that runs about 80 years. But it does not drag, it just does not hurry along.

This is what a Christian novel should be like. Berry is a theologian, poet, novelist, farmer. He is not writing Christian novels. He is a novelist that is writing great literature. This is a books about real life. It involves people that do things that people do, they love, fight, have affairs, work hard, etc. I was almost surprises how freely Hannah talks about sex, never vulgar or inappropriate, always with euphemisms. But sex was a part of her life and a part of her marriage and therefore a part of her story. I read too many Christian novels that paint pictures of people that are just not lifelike.

I also read too many Christian novels that preach. Berry never preaches through Hannah, but Hannah does pontificate as older people sometimes do. She shares about economics, thrift, community, war, relationships, environmentalism and much more. It is never preaching. It is always in context and feels like she is simply sharing some wisdom as an aside. Do not let this hold you back from reading, it is not a large part of the book, but I am struck how intellectually challenging a simple book like this can be if you allow it to be more than just the story. (Although reading it for just the story is well worth it.)

I felt like I could be one of Hannah’s grandchildren listening to the story. I have listened to my Grandmother tell stories like this. I have a group of guy friends from college. We get together every year and have talked about the fact that basically all of our parents grew up on farms. With one exception, all of our parents left the farm and and our generation only occasionally visits. We are of an age when most of our grandparents have died and while most of the families still have at least the house and a little bit of the land the connection is slipping.

Wendell Berry writes nostalgically in the best sense of the term. He was himself born in 1934. He remembers the losess that we as a culture have felt as we have lost our connection to the land and the farm. He knows not everything is better on the farm, but he also is well aware that some things are definitely worse.

Originally posted on my blog at http://bookwi.se/hannah-coulter/
Review by Adam / (Posted on 3/28/2013)
Like Homemade Pie
My wife bakes a marvelous homemade pie that makes store bought pies seem like mud pies. There is substance and depth and richly balanced flavors and textures in my wife's pies. 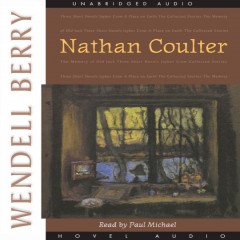 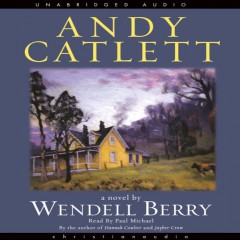 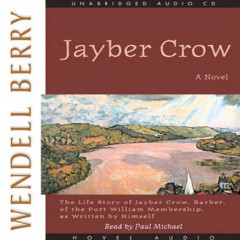 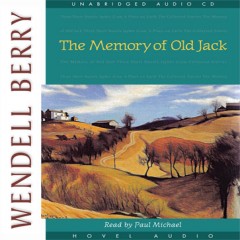 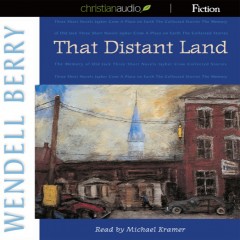