Zack Brewer faces a choice. It can prevent the next war. But it will cost the life of the person he loves the most.

JAG Officer Zack Brewer's prosecution of three terrorists posing as Navy chaplains was called the "court martial of the century" by the press. Now, with the limelight behind him, all Zack wants to do is forget. But the radical Islamic organization behind the chaplains has a long memory - and a thirst for revenge.

Now the Navy has a need for Zack that eclipses all else. When an unthinkable act of aggression brings Israel and its Arab neighbors to the brink of war, Zack and co-counsel Diane Colcernian are called to the case of a lifetime. As leading nations focus their gaze upon these two, other eyes are watching as well.

Zack and Diane are in harm's way.

A kidnapping, an ultimatum...and suddenly, Zack faces an impossible choice. If he loses this case, the world could explode into war. If he wins, his partner - the woman he loves - will die. And Zack himself may not survive to make the decision. 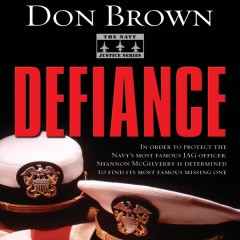