Purchase the print version of Not for Sale from Amazon!

Award-winning journalist David Batstone reveals the story of a new generation of 21st century abolitionists and their heroic campaign to put an end to human bondage. In his accessible and inspiring book, Batstone carefully weaves the narratives of activists and those in bondage in a way that not only raises awareness of the modern-day slave trade, but also serves as a call to action. With 2007 bringing the 200th anniversary of the climax of the 19th century abolitionist movement, the world pays tribute to great visionary figures such as William Wilberforce of the United Kingdom and American Frederick Douglass for their remarkable strides toward framing slavery as a moral issue that people of good conscience could not tolerate. This anniversary serves not only as a commemorative date for battles won against slavery, but also as a reminder that slavery and bondage still persist in the 21st century.

An estimated 27 million people around the globe suffer in situations of forced labor and commercial sexual exploitation from which they cannot free themselves. Trafficking in people has become increasingly transnational in scope and highly lucrative. After illegal drug sales and arms trafficking, human trafficking is today the third most profitable criminal activity in the world, generating $31 billion annually. As many as half of all those trafficked worldwide for sex and domestic slavery are children under 18 years of age.

Mention slavery and most people will...
Mention slavery and most people will think of the long abolished transatlantic slave trade. Unfortunately for a staggering number of people today slavery is not stories from hundreds of years ago they read in a history book but their daily, inescapable reality. Despite slavery being illegal around the world, an estimated 27 million people are slaves today, more than the total of the whole transatlantic slave trade. The men, women and children caught in slavery are often trafficked across borders, are often victims of physical & sexual violence and are denied some of the most basic human rights. In Not For Sale, anti-slavery campaigner David Batstone attempts to raise awareness of this huge issue. He weaves together real life stories of slaves with statistics, background information, stories of those helping free & rehabilitate slaves and information on how to contribute to the fight against slavery. The book is divided into several sections on different types of slavery prevalent in different parts of the world, notably including contemporary forms of slavery and human trafficking in America. I should warn you that some of the slave’s stories are horrific and some people may find them distressing. The book necessarily deals with some adult concepts. Please don’t let that put you off the book because it is a very important one that raises issues that need to be understood and challenges that need to be overcome. I recommend Not For Sale to all adults, particularly those with an interest in social justice.
Review by Joanna Holman / (Posted on 1/18/2010)
This book has opened my eyes...
This book has opened my eyes up to the huge problem of modern slavery. It's impossible not to get involved after hearing these stories. A real revelation for those who don't know much about the subject, and a very well read audiobook.
Review by Ben McBride / (Posted on 7/13/2009)
This is a must-read for any...
This is a must-read for any Christian who is willing to face the reality of what's going on in the world -- far from the headlines. Be prepared for heart-wrenching stories -- many times I had to just stop the audio and mourn the suffering of those in bondage. David Batstone does a masterful job at weaving individual stories together, and mixing in information the problem of human trafficking as a whole, region by region throughout the world. For the new believer looking to sink their teeth into what it means to follow Christ, or for the long-time Christian looking for a new cause to reinvigorate their faith, Not for Sale will move anyone willing to be so moved.
Review by David Hawkins / (Posted on 4/27/2009)
Show ALL Reviews
This is the most interesting book...
This is the most interesting book that I have ever listened too! I would recommend to anyone!
Review by Grant Garber / (Posted on 2/23/2009)
Well worth the time to listen...
Well worth the time to listen to this audio book. Thank you for making it a free download. I will most likely purchase the book also but it was great to be able to listen as I drove and did other things.

Human Trafficking is an issue that needs to be put out in the open as much as possible. This book does an excellent job of presenting various types of trafficking through the telling of specific true experiences. It lays out what is being done to fight slavery and provides suggestions for individuals to get involved as abolitionist. There is also a significant list of websites/organizations at the end which provides a "next step".

I recommend this book for anyone new to the issue and to those who are looking for a book to recommend to friends who continue to wave off the subject when you bring it up.
Review by Lisa Crum / (Posted on 2/4/2009) 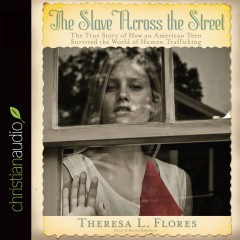