Airline Captain Connor Evans has nearly forgotten that stormy weekend in Hawaii nearly ten years ago when he broke the greatest promise of all. Now Connor has the perfect life with his wife, Michele, and their two daughters, and the secret of that long-ago time is his own. But an ocean away, a flight attendant is raising her young son by herself when the plane she's working on crashes into the Pacific. Her will is very clear about one thing: before her seven-year-old son, Max, can be turned over to the state, he must spend the summer with the father he's never met, the father who doesn't know he exists, Connor Evans.

The news rocks Captain Evans' life, and in the process he is presented with a choice: refuse the child and never hear from him again, or take him for two weeks and decide whether to claim the boy as his own. Now the family is on the brink of destruction. Can Michele and their daughters ever forgive Connor for what went wrong all those years ago? Or will the presence of one lonely child destroy everything?

Good book
Very good book. It made the traveling time go by very fast!
Review by Oceans Apart / (Posted on 2/1/2016)
Not one of her best
I really like Karen Kingsbury, but this book wasn't that good. Maybe I just can't relate to the situation? I just can't understand the woman in this book. Otherwise, it's a heart warming story as always. Karen Kingsbury is a master at writing feel good books.
Review by Eva / (Posted on 7/13/2011) 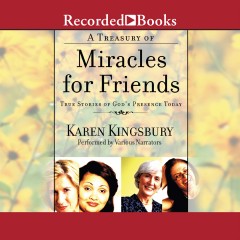 Treasury of Miracles for Friends
Karen Kingsbury
Regular Price: $10.99 Member Price: $8.79 (or 2 credits)
Sign up for our newsletter!