It’s Christmas in Houston, and homicide detective Roland March is on the hunt for a killer. A young woman’s brutal stabbing in an affluent neighborhood bears all the hallmarks of a serial murder. The only problem is that March sent the murderer to prison ten years ago. Is it a copycat — or did March convict the wrong man? Alienated from his colleagues, and with a growing rift in his marriage, March receives a series of taunting messages from the killer.

The bodies pile up, the pressure builds, and the violence reaches too close to home. Up against an unfathomable evil, March struggles against the clock to understand the hidden message in the pattern of wounds. Praise for Back on Murder “Bertrand’s got a pitch-perfect ear for dialogue. The cop-talk, for fans of the tough guy genre, hits the right note every time.” — Comment “Bertrand’s well-plotted and tightly written novel offers glimmers of a world beyond the gritty Houston streets his cop must roam.” - World 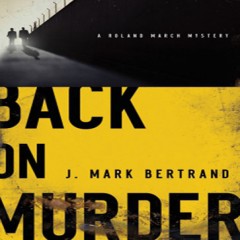