Supplemental PDF download with the text of each prayer also included!

Prayers: A Personal Selection read by Michael York and composed by Michael Hoppe contains some of the most significant and most beloved prayers in Christianity. Our Lord's Prayer, the prayers of both Old Testament and New Testament saints, and some of the most famous Christian prayers are beautifully and warmly narrated by Michael York. These classic devotional prayers are sure to encourage and grow one to greater faith in Christ.

Lacks authenticity
Background music was nice however I felt the reader come across a little bit false in his expounding of the prayers
Review by Sandro / (Posted on 7/20/2016)
Excell choice for every Christian!
What a blessing these Prayers have been to me. Every time I listen to them, my heart melts before God and I thank Him for the Brethren who made these prayers so effective! May God Bless You All. What's more....Give some more!!!
Review by Solly / (Posted on 8/28/2015)
Great Resource
York and Hoppe have great reading voices. I use this both personally and at the church I pastor. Many of them are just scripture. If you like audiobooks and if music/speaking help you to pray, you'll love this resource.
Review by Zachariah / (Posted on 3/3/2013)
Show ALL Reviews
I really wanted to like this
(for the audio book)

There is such a gaping hole in the market for products like this so I was very happy to have found this and really really wanted to like it... but I didn't... at all.

I guess my biggest problem is with the narrator. I don't know anything about him and don't know if that is his natural speaking voice but somehow it sounds false and put on like a spoof of on bad Shakespearean actor. Its a little frustrating, because he tones it down once in a while which shows it could have been done better. Sorry, just my honest reaction. A put on voice for prayer just says all the wrong things to me.

There were some nice selections but using the KJV was also a bad choice IMO. The generations that knew that version are all but gone now and I don't really buy into the charm of using archaic and unfamiliar language.

Ah well, enough from me. You get the idea. I was very disappointed. As far as the audio format goes, there is much better free stuff floating around out there. I guess when I actually pay for a similar product I expected it to be at least as good.
Review by Henry / (Posted on 8/23/2012)
Sorry, not my favorite
I read (that is listen) to audio books while I drive as I drive about 80 miles per day in commuting and picking up a granddaughter. This is the first christianaudio book that I have not listened to from beginning to end. I thought that I would be hearing prayers that I was familiar with, but with little exception, the prayers were foreign to me.

Michael York’s voice was pleasant and added to the experience and the music was very nice and also added to the prayers. Since this is an audio book, it isn’t convenient to have a table of contents or footnotes so it was difficult to know what was coming up next or the basis for the prayers.

While many of the topics were very meaningful, since you cannot conveniently jump to a prayer that may answer you particular needs at the time, the book leaves you with listening to one prayer after another.

After listening to most of the book, I cannot say that I particularly remember any prayer that was especially meaningful to me to remember.

My prayer life is much more personal talking with God directly and I did not find this book very helpful for my own prayer life.

I received this audio book free from http://christianaudio.com Reviewers Program in exchange for posting a review. I was not required to write a positive review. The opinions I have expressed are my own.
Review by Kurt / (Posted on 9/10/2011)
Beautiful and inspiring
What a beautiful audiobook! I don’t generally start out a review with such a statement, but this collection of classic prayers certainly earned it. Prayers: A Personal Selection features Michael York reading the prayers, which include some of those found in the Old and New Testaments as well as other well-known prayers, to music composed by Michael Hoppe. The narration and music are masterfully done and the prayer selections are incredibly uplifting.

I initially listened to the entire CD all the way through, but have found that the prayers also make a nice addition to a playlist of inspirational or relaxing music.

I highly recommend that you add this audiobook to your collection for those times when you need to be lifted up.

Disclosure of Material Connection: I received this audiobook free from the christianaudio Reviewers Program. I was not required to write a positive review. The opinions I have expressed are my own. I am disclosing this in accordance with the Federal Trade Commission’s 16 CFR, Part 255: “Guides Concerning the Use of Endorsements and Testimonials in Advertising.”
Review by Nate LaClaire / (Posted on 6/13/2011)
Not my cup of tea, but perhaps for the prayer enthusiast...
Michael York has always been an exceptionally creepy character in films, much due to his common portrayal of the antichrist. His voice does not help the situation much. However, in this audio book, York’s voice is presented in a less sinister manner, providing a clear and proper voice to the selection of prayers recited with a musical background.

Read the rest and more on my blog...
Review by JE / (Posted on 1/17/2011)
An excellent addition to one’s Christian audio library
Listeners feel the emotional depths of each prayer as Michael York's voice rises to a crescendo of praise and then drops to a meditative tone. With a selection of 24 prayers ranging from various Bible passages from the King James Version to well-known prayers like The Prayer of St. Francis and The Serenity Prayer, this production treats listeners to a variety of meditations upon the majesty of God. York evokes both the urgency of confessing and of waiting for the Lord’s answer to a particular petition. Michael Hoppe offers a dynamic original musical score for each prayer. Overall, this is an excellent addition to one’s Christian audio library. T.D. © AudioFile 2010, Portland, Maine
Review by AudioFile Magazine / (Posted on 12/13/2010)
Devotional Prayers
This review first appeared on my blog, Jacob's Café (http://jacobscafe.blogspot.com/2010/12/prayers-personal-selection.html). I received a complimentary review copy of this book without a requirement or expectation of a positive review.

This is not your traditional prayer book; rather it is an audiobook. Prayers: A Personal Selection is narrated by Michael York (yes, the actor). York's British accent lends a sort of grand gravity to the words. The accompanying music, by Michael Hoppe, could be seen as cheesy in many audiobooks, but truly adds something meaningful to book.

Running at only 53 minutes, this audiobook is particularly useful for a devotional time. I listened to this on my commute to work, meaning it was broken up into smaller sections. And it was not a very stress-free week. However, when I began listening to the words and music, it helped me calm and center myself. This is definitely an excellent prayer book for those of us who are more auditory. It will also be one of the few audiobooks I will return to time and again.

It would have been nice to have some way to identify the Scripture references and other prayers used in the book. Doing so at the end of each prayer would have likely taken away from the flow and meditative nature of the experience. This allow easier referencing later if one particular prayer stood out as especially meaningful to the listener. I also would have liked to know whose personal selection these prayers were. York's? Hoppe's? An editor's? It's not really important, but as "a personal selection" is in the title, this context would be helpful.

Most of the translations seem to come from the King James Version, giving the book a traditional feel. Yet in the audio format and with York's voice, it is not off-putting, but rather aids in the devotional element, in my experience.
Review by Josh Morgan / (Posted on 12/6/2010)
Captivating
I’ve enjoyed listening to this wonderful collection of biblical and non-biblical prayers through the ages. I was unsure what to expect as I thought it might be a bit dull, but I have been very pleasantly surprised by the captivating combination of words and music.

Michael York’s voice, which I’m sure everyone will recognise, is just perfect, as he reads the prayers clearly, with a sense of wonder and reverence, giving great depth to them. The musical accompaniment is very complementary, and there are a couple of tracks with just music, which definitely adds to the whole recording.

It is disappointing in that there are no titles to tell you the names of the prayers. I was able to recognise a few, but it would be helpful to have them read out at the start of each one.

I think it’s a perfect audio, if you need to take time out to de-stress at the end of a hard day, and focus on God.

Thanks to christianaudio.com’s Reviewers Program for this copy.

Review by Nicki / (Posted on 12/4/2010)
Great Devotional Compliment
This month I had the pleasure of reviewing Prayers: A Personal Selection from christianaudio Reviewers Program Michael York lends his voice talents to the reading these great devotional prayers. Michael's rich and warm voice is a perfect match for this contemplative journey. I especially enjoyed the music accompaniment composed by Michael Hoppe.


The prayers are a good mix of modern and ancient prayers of Christian faith. Many of the prayers come straight from Old and New Testament. This variety along with the musical score keeps the recording feeling fresh. I really enjoyed hearing the scriptural prayers set to music and thoughtful narration. Michael's treatment of the 23rd Psalm was one of my personal favorites.


One drawback for me personally was the lack of references to the prayers. At times I wished I could have had a way of knowing the source of the prayers. I would have found it more useful for my devotional times to have had the references cited after each reading. Perhaps this would have interrupted the flow of the music or devotional nature of the work, but I would think a list of references in some form would have been a nice enhancement. Even without the references this is a heart stirring work that was very thoughtful and the perfect compliment to a devotional time.
Review by Ron / (Posted on 11/29/2010)
Great rendition of well known prayers
Michael York and Michael Hoppe team up to bring to us a deeply emotional rendition of common prayer passages from the KJV as well as some of the more notable prayers that have been prayed down through the centuries.

This audiobook is an excellent resource for the believer who seeks to spend more time with the Lord--especially on the drive time.
Review by Terry / (Posted on 11/23/2010) 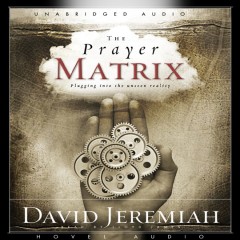 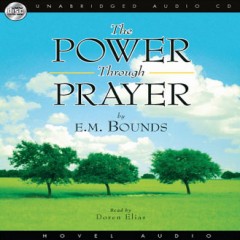 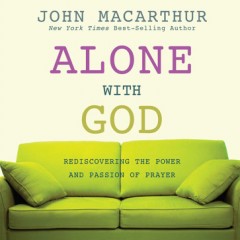 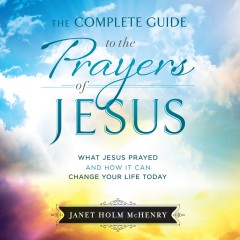 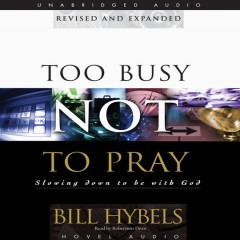 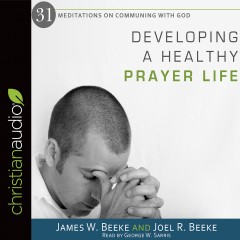 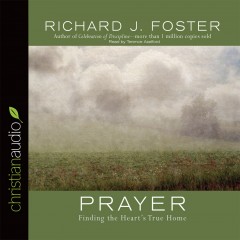 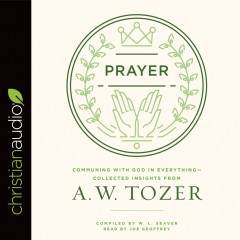