“Sinners in the Hands of Angry God” is considered the most famous sermon ever preached in American history. Jonathan Edwards delivered this message on July 8, 1741 in Enfield, Connecticut. Many who heard it trembled and cried out for mercy. Others fainted. Five hundred people were converted that day.

Jonathan Edwards (1703-1758) America's greatest theologian and philosopher. One of the key figures in the "Great Awakening." Entered Yale at twelve and was the Head of Tutor at twenty-one. Edwards pastored congregations for over 30 years and earned a reputation as a consummate rhetorician and master preacher. Shortly after becoming President of Princeton University he died of complications from a smallpox inoculation. He is buried in Princeton cemetery.

I read the book/sermon "Sinners in the Hands..." before I heard the audio version, but hearing it audibly was so much better. In fact I didn't remember much about the sermon after reading it for some reason. It didn't stay with me. However, the audio version has never left my mind. What I'm trying to say is that the audio version will really pin this to your mind and make an impact on you.
Review by Joseff Amador / (Posted on 1/5/2011) 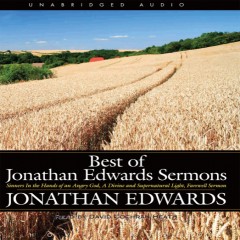