Description
The Epistle of Barnabas is commonly categorized among the Apostolic Fathers alongside the writings of St. Clement, St. Ignatius, and St. Polycarp. This epistle can be dated near the end of the first century and was considered important by many of the early church fathers. It was most likely written to new Jewish believers in response to the growing heresy that the Old Law was still necessary for salvation.

A good example of how the early church interpreted the Old Testament, the Epistle of Barnabas explains how the Jewish law finds its true fulfillment in Jesus Christ. Furthermore, according to the author, the Old Law cannot be correctly understood in terms of the physical practice of it, but must be read allegorically toward its fulfillment in the Messiah. 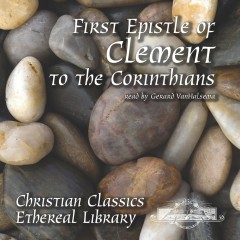 First Epistle of Clement to the Corinthians
Various Authors
Regular Price: $9.98 Member Price: $7.98 (or 2 credits)
Sign up for our newsletter!